In contrast to outdoor riding areas, indoor riding areas are not subject to variations in weather influences such as rain, wind or leaf fall. However, sunshine and air also play an important role here. A “wave effect” can occur where corrugations form as the riding area goes from a dry side to a moist side. The increased introduction of dirt and generally heavily frequented winter months in most cases lead to higher wear than for outdoor riding areas. Thanks to our years of experience in building riding areas, we recommend a surface that is stable under pressure and particularly resistant to shearing. It should be well reinforced, prevent ground water penetrating and be optimally adapted to your needs.

This is what a good indoor riding surface should do

An indoor riding arena surface is responsible for three important functions at the same time. First, it holds back rising ground water. It also ensures that the water added in a controlled manner to the surface can be stored in accordance with the required surface moisture. Finally, it ensures that excess water drains into the earth without backing up.

The proportion of horse dung in an indoor riding arena is significantly higher, with a consequent level of wear and loss with regular cleaning. Therefore, you should make sure that, particularly indoors non-rotting, wear resistant and easy-care footing components are used.

The surface in an indoor riding arena should have good grip and be homogenous, independent of the load. Particularly high shear forces are applied especially in the winter, due to the high intensity of riding, which can be absorbed by a compact but still elastic surface structure.

During installation it should be particularly ensured that the natural soil is taken away from the surface and a slope of 1 – 1.5 % established. Cover the prepared soil with a thin layer of fleece that reduces the grid pressing into the soil and thus functions similarly to foundations. Please note that the surface drainage is only as good as it was before laying the grids.

A compact, separating layer that is stable under pressure prevents the natural soil mixing with the footings. It prevents the riding surface from slipping and offers permanent surface stability. In connection with the permeable top soil, our ECORASTER grids  ensure the necessary drainage function and optimum water regulation.

The surface of the riding area should always be slightly lower than the entrance to the arena so that not too much footing material is lost during cleaning. The more elastic it is, the gentler it is on animal tendons and joints. Good indoor footings bind the dust and at the same time are not too damp.

How to act against hardening of the surface

Especially with older indoor arenas, instead of using a neutral base layer, the surface was installed directly onto the natural clay soil. Over the years and with increasing load, the surface becomes compacted and hardened. The danger of slipping increases accordingly, in particular if the surface is too dry and can no longer connect to the smooth natural soil. This slipping effect is increased further if water can no longer run off and collects on the hardened layer. In both cases, the lack of good grip leads to a cramped and uncertain gait of the horses. The enjoyment in movement reduces noticeably.

To solve the problem, you should take off the upper layer of the natural soil across the whole area and insert a broken rock mixture to make the surface loose and permeable again. Afterwards, establish a slope of 1 – 1.5 % onto which the fleece and grids are laid. With particularly high clay content and very hardened ground, we recommend laying an additional, permeable broken rock/gravel sub-structure to reestablish the water drainage.

Our products for your indoor riding arena

Some of our indoor riding surface references 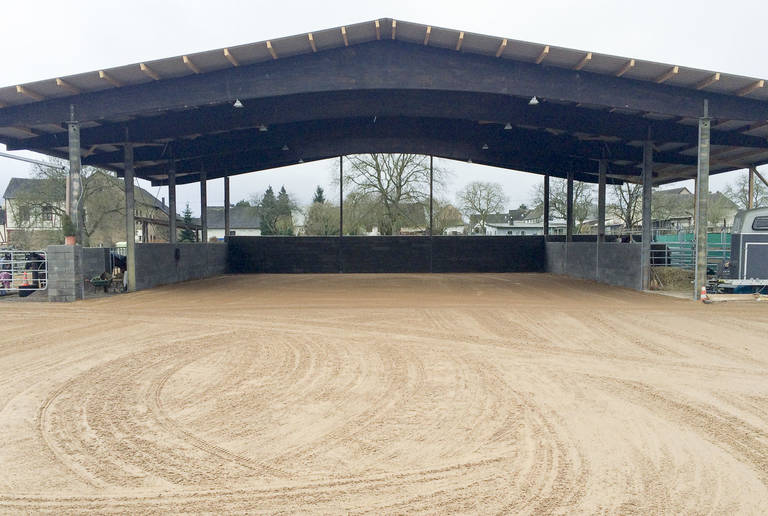 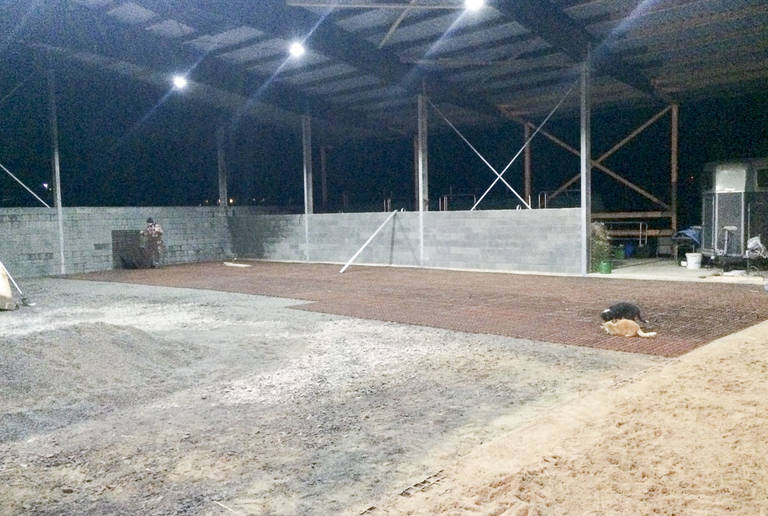 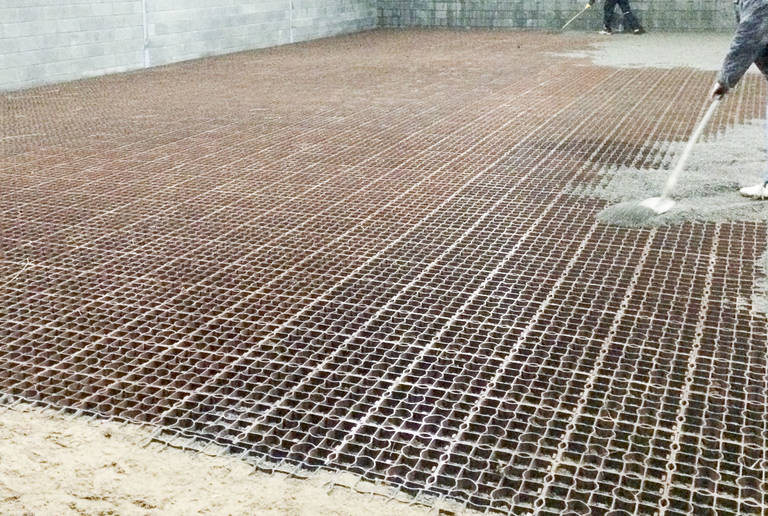 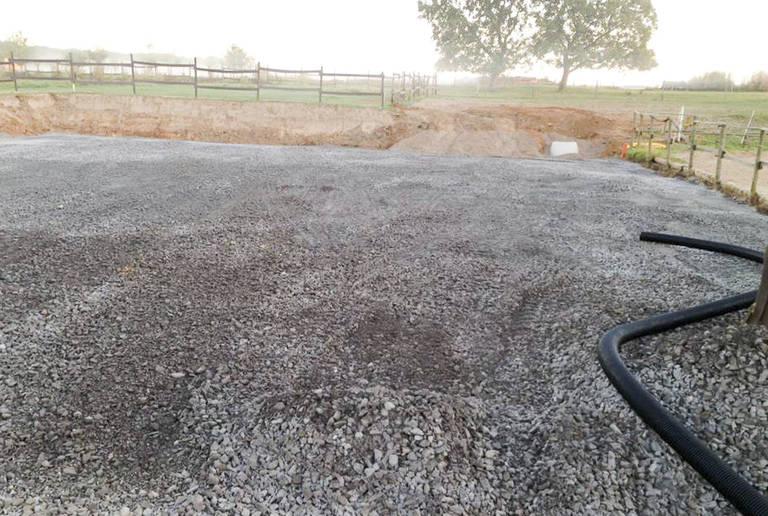 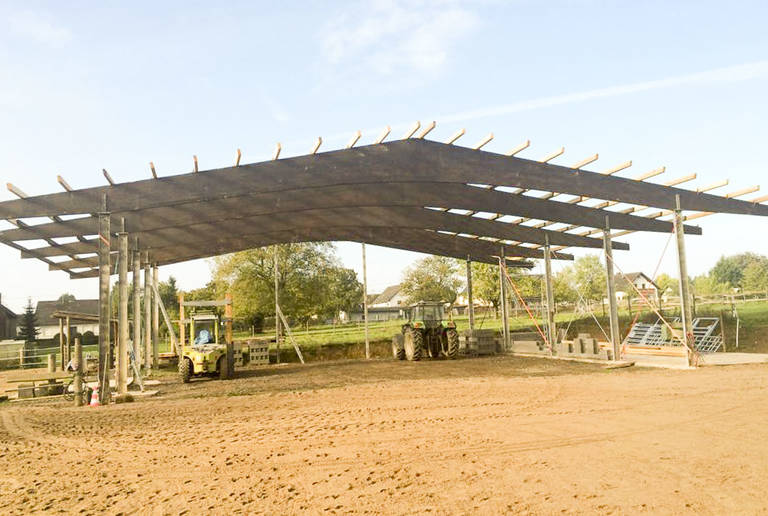 Our ECORASTER for self installation as the base for the best, safe slides.

At the western stable “auf den großen Gärten” in Kail, a new indoor riding arena has been built focused on the discipline of western. In the process, Mr Berg made a conscious decision for a western riding surface from ecora.

At the beginning, the natural soil was removed and a lava sub-structure created. In the next step, the whole area was raked over with a grit layer and our ECORASTER TE40 laid as a separating layer. Thanks to the easily understood installation instructions, it was easily possible for Mr Berg and his helpers to install the grids in a very short time. After reinforcing the surface, the grids were filled with grit and then covered with loose western sand. ECORASTER as the substrate is also most suitable for western riders, and even “sliding stops are no problem” according to Alexander Berg.


Your first step to a tailored indoor riding arena surface!